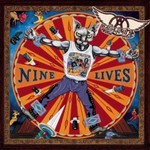 From the rip-roaring title track on, Steve, Joe & Co. show there's plenty of life in them yet.

Later things get weirder with some real deranged and strung.out rock'n'rollers like "The Farm" and "Crash" which pretty much describe how Aerosmith used to be. Guitarist Joe Perry gets his usual one song on lead vocals with "Falling Off", and on "Something's Got To Give" he whips out the slide for some full on treatment. He and Brad Whitford retain their preference for the classic sound of Les Paul Gibsons on full volume and Steve Tyler is his usual hyperactive rhyming slang man self."
- GEOFF