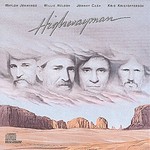 "Although they had previously worked together in various separate capacities, this was the first (and best) collaboration by this quartet of country superstars - Willie Nelson, Johnny Cash, Waylon Jennings, and Kris Kristofferson - collectively known as... The Highwaymen. After this very successful debut, they recorded two more great albums together and even toured New Zealand in May 1991. The trilogy of recordings remain their legacy - sadly, Waylon and Johnny passed away in 2002 and 2003 respectively.

'Highwayman' features the superb Jimmy Webb penned title track, a number of originals, plus sterling covers of songs by the likes of Guy Clark, Woody Guthrie, and Bob Seger.

Originally produced in 1985, 'Highwayman' is a much-celebrated recording of traditional, feel-good country songs that has over the years become legendary, just like the outlaw figure that the stories on it conjure up. And, at just under NZD$10.00 this CD has got to rate as a tremendous deal - almost highway robbery!"
-GEOFF & MARTY (06/08/2005)

1. Highwayman
2. The Last Cowboy Song
3. "Jim, I Wore A Tie Today"
4. Big River
5. Committed To Parkview
6. Desperados Waiting For A Train
7. Deportee
8. Welfare Line
9. Against The Wind
10. The Twentieth Century Is Almost Over

Now Playing! Willie and the Wheel