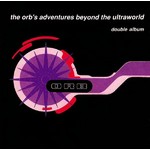 The Orb
The Orb's Adventures Beyond the Ultraworld

A truly stunning debut and one of the most dreamlike aural experiences available to mankind... comparable to such seminal works as Eno's 'Music for Airports', and Vangelis' soundtrack to the Sci-fi movie classic, 'Bladerunner'.

"Birthed in 1991, 'The Orb's Adventures Beyond the Ultraworld' is a masterpiece of modern ambient / chill-out music. At nearly 2 hours in length, this double CD represents a sensual and totally absorbing journey into deep space and the inner mind.

Spearheaded by the renowned Dr Alex Patterson, The Orb, which also included KLF'er Jimmy Cauty and Youth, were one of the original purveyors of this particular form of "head music". Never taking themselves too seriously, they went on to make many stylish and intriguing recordings, although none quite as evolutionary as this debut release.

TOABTU features a few subtle references to Pink Floyd, plus some of the most hilarious and OTT song titles ever. Fine examples of this are the outrageous single "Little Fluffy Clouds", "Supernova at the End of the Universe", and the album closer "A Huge Ever Growing Pulsating Brain That Rules From the Centre of the Ultraworld: Live Mix MK 10".

Production credits on TOABTU include former Gong guitarist, Steve Hillage, who helped construct the album around massive amounts of samples, dub beats, and swirling atmospherics. These elements are incorporated throughout the 109.41 minutes of duration, making for a sound that appears to throb and mutate - cultivating like an amoeba as the album progresses.

To say that this most adventurous of recordings is "trippy" is a gross understatement. Indeed, TOABTU is one of the most dreamlike aural experiences available to mankind, comparable to such seminal works as Eno's 'Music for Airports', and Vangelis' soundtrack to the Sci-fi movie classic, 'Blade Runner'.

A bona fide original, The Orb and their albums (especially TOABTU) are still as relevant today as ever they were."
-MARTY