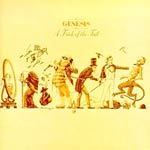 Genesis
A Trick of the Tail

Now digitally re-mastered, this recording was the first post-Gabriel Genesis album to feature Phil Collins on lead vocals. Being nothing short of an indispensable purchase, 'A Trick of the Tail' sees the band in top form - highly recommended!!

"'A Trick of the Tail' is significant in the history of Genesis as it features Phil Collins' amazing debut as lead vocalist for the band - he had previously sung backups for them, but was otherwise happily consigned to his drum stool. This resultant recording is generally regarded as the group's best all-round, post-Peter Gabriel release.

The grandeur of "Dance on a Volcano" kicks off this marvelous album quite elegantly. It is then followed with the angelic "Entangled"; "Squonk"; plus superbly jovial numbers like "Robbery, Assault & Battery" as well as the wondrous title track. Also included are such beautifully melodic compositions as "Mad Mad Moon" and the magical "Ripples". The album closer is the majestic instrumental piece, "Los Endos", which sounds like something that Weather Report (or Phil's other band, Brand X) could have recorded.

It's no exaggeration to say that all of the songs offered here exude the kind of supreme musicality that these fine players have become renowned for. The arrangements & lyrical content are also enriched with the sort of dreamy whimsicality that belies the band's typically English fashion.

After all this time, 'A Trick of the Tail' remains one of the most essential Genesis albums to have. Indeed, although Peter had left the band 18 months prior to it's unveiling in 1976, Steve Hackett, Mike Rutherford, Tony Banks, and of course, Phil were more than up to the challenge of carrying on. Every meticulously crafted moment of this recording proves that hands down - listen to it, it's seriously wonderful!!"
-MARTY (01/05/2007)

Selling England By The Pound