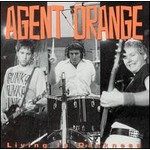 Were they punk, power pop, or surf rock? After listening to Rhino Records' reissue of Agent Orange's classic 1981 debut Living in Darkness, that's probably what the listener will be wondering. By incorporating all three musical elements into one, this influential Orange County, CA. band showed that they were a step ahead of the rest of the punkhardcore pack. By adding seven hard-to-find cuts (including pre-debut singles and an interview from 1981) to the original album, this reissue of prime Agent Orange material is by far their best release, and the most appealing for newcomers to the band. The group gained some attention in the mid-'90s when it became public knowledge that alterna-punks the Offspring were huge fans of the band, which led to speculation that they lifted the Middle Eastern motif contained in Agent Orange's "Bloodstains" for their breakthrough hit "Come Out and Play (Keep 'Em Separated)." The comparison was debatable, but A.O. had lots of other great material, some showcased here - a cover of Dick Dale's "Miserlou," "Too Young to Die," "No Such Thing," and of course the aforementioned "Bloodstains." You'd be hard pressed to find a better compilation of Agent Orange material than this reissue of Living in Darkness. ~ Greg Prato, All Music Guide