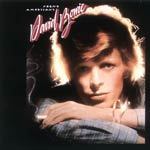 Originally released in 1975, this re-issue edition of 'Young Americans' is 24-Bit digitally re-mastered and contains a superb booklet.

David Bowie abandoned the glam/sci-fi persona of Ziggy Stardust, Aladdin Sane and Diamond Dogs with this radical departure. Recorded at Sigma Sound Studios, the home of Philadelphia International, it featured the label's crack house band and, as a result, confirmed the singer's growing love of soul and R&B. Pulsating dance grooves abound, in particular on the disco-influenced 'Fame', which topped the US singles chart. The song was co-written with John Lennon, a compliment Bowie repaid by reinventing the Beatles' 'Across The Universe' as a dancefloor classic. Such self-confidence abounds throughout this album which shows the singer firmly in command of yet another musical direction.