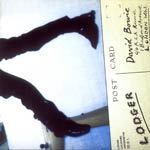 24 Bit Digital Remaster & Superb Booklet. LODGER (1979) was third in Bowie's Berlin trilogy, his collaboration with legendary producer/experimentalist Brian Eno, which began with HEROES and LOW (both released in 1977). While those dark records were heavy on alien-sounding instrumentals, LODGER had none, and even contained songs that seemed relatively straightforward. Considered inaccessible at the time, LODGER now sounds like a classic, transitional Bowie album, if only for its rich spirit of experimentation. From the Middle Eastern strains of "Yassassin" to the bizarre wordplay of "African Night Flight," LODGER feels like a journey through strange lands.

Songs like "Boys Keep Swinging" (later covered by ex-Bangle Susanna Hoffs) and "DJ" have the structure of traditional rock songs, but the odd textures, rough edges and dissonant elements make them into something richer and stranger. "Look Back in Anger," with fierce guitar playing by Adrian Belew, became a staple of Bowie's live concerts for years to come. "Red Money" is Bowie's adaptation of Iggy Pop's decadent, futuristic "Sister Midnight" from THE IDIOT. The anthemic "Red Sails" (co-written with Eno) has a majestic sense of forward motion, its glorious crescendo and fadeout providing the record's most spine-tingling moments.