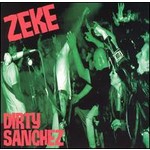 Though the shadow of Dwarves will always loom over Zeke's catalog of recorded output - considering the brevity of the songs, the reference to certain themes, drug use, and general nihilism, it's actually a reductive comparison to make. As a band, Zeke is a hair more accomplished musically than Dwarves, and is really no more or less a rock & roll band than, say, Rose Tattoo. Zeke, like Speedealer, just plays a whole lot faster. Make that a whole, whole lot faster. Dirty Sanchez finds the band all but eradicating the high-performance vehicle motif developed on earlier albums, in favor of a generalized bad attitude and bleak carelessness. Punk rock, one supposes. It is rather interesting to note that Zeke has ratcheted up the tempo with every successive album, and though each and every song stings with lightning fast Nugent-like guitar leads, the band sounds more punk rock on this album than in years before. Generally, it works in the opposite manner: bands tend to start off playing fast punk rock by default, then progress toward slower, more developed arrangements as the years wear on. Thematically, Zeke carries the sleaze torch here - most of the tracks are about drugs, alcohol, sex, suicide, weaponry, either alone or in various combinations. That's rather trite at this point, but the album burns from start to finish. ~ Patrick Kennedy, Rovi