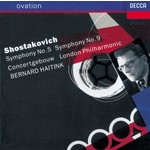 "In No 5 Haitink is eminently straightforward, there are no disruptive changes in tempo, and the playing of the Concertgebouw Orchestra and the contribution of the Decca engineers are beyond praise...the coupled No 9 is superb."
*** Three Stars Penguin Stereo Guide

"In No 5 Haitink is eminently straightforward, there are no disruptive changes in tempo, and the playing of the Concertgebouw Orchestra and the contribution of the Decca engineers are beyond praise...the coupled No 9 is superb."
Penguin Stereo guide

One of the greatest conductors of today, Bernard Haitink will remain as Music Director of London's Royal Opera House, Covent Garden until 2002. He was previously Music Director at Glyndebourne (1978-88), and has conducted many operas for television and video with both companies. Bernard Haitink's career as an orchestral conductor is no less distinguished: Chief Conductor of the Concertgebouw (1964-88); Principal Conductor of the London Philharmonic (1967-79) becoming their President in 1990; Music Director of the European Union Youth Orchestra (1994-) and Principal Guest Conductor of the Boston Symphony (1995-). The Royal Concertgebouw Orchestra also recently announced that Bernard Haitink has been appointed their Conductor Laureate - the first time that such a title has been awarded in the history of the orchestra. The award was made in recognition of the great contribution he has made to the orchestra since his conducting debut with them in 1956.
During the closure of the Royal Opera House, Bernard Haitink conducted performances of the Ring Cycle in London and Birmingham, Der Freischutz and Mephistopheles in the Barbican, Don Carlos at the Edinburgh Festival and Bartered Bride at the newly refurbished Saddlers Wells theatre. In December 1999, Bernard Haitink conducted the inaugural Gala concerts at the Royal Opera House immediately followed by performances of Falstaff. Later in the 1999 / 2000 season, he also conducted Die Meistersinger von Nürnberg. Bernard Haitink led a new production of Tristan und Isolde at the Royal Opera House and returned there for performances of Falstaff in January 2000.

Beside these commitments at the Royal Opera House in London, Mr Haitink is a regular guest with the world's leading orchestras including the Berlin Philharmonic, Royal Concertgebouw, Vienna Philharmonic, Dresden Staatskapelle, London Philharmonic and London Symphony Orchestras. He toured with the Berlin Philharmonic throughout Europe during the summer of 2000, including concerts at the Salzburg Festival, BBC Proms and the Lucerne Festival. As Principal Guest Conductor of the Boston Symphony Orchestra he also makes regular appearances with them in Boston, and in New York, and will tour with them in Europe during the summer of 2001.

In his seventh decade, Haitink's his ability to invigorate and stimulate musicians seems to be as powerful as ever, as described in a concert review with the London Philharmonic a few years ago: "For the twelve years up to 1979 that Bernard Haitink was the London Philharmonic's music director, the orchestra was arguably the finest in the land. But orchestral fortunes change; on recent form the LPO would struggle to make it into a British Top 5. Yet reunited with Haitink for two concerts last week, it was transformed. All the unhappy recent history was forgotten and on Saturday with a conductor of the highest class, the strings rediscovered their bloom, the woodwind their articulacy, the brass their attack and the whole orchestra its concentration and commitment." (The Guardian, March 26, 1996).

Bernard Haitink has received many awards in recognition of his services to music, notably an Honorary KBE in 1977 and the Erasmus Prize in Holland in 1991. Most recently he received a House Order of Orange-Nassau, given to him by the Queen of The Netherlands for his achievements in the Arts.

Mahler: Symphony No 8 'Symphony of a Thousand'
more suggestions…