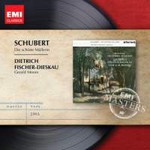 "EMI have understandably chosen Fischer-Dieskau's 1961 recording of Die Schone Mullerin (which includes spoken versions in German of the Prologue and Epilogue) for their 'Great recordings of the century' series"
(***) Three Stars. Penguin Stereo Guide.

Made in 1961, this recording is considered to be the finest of Fischer-Dieskau's three versions of Schubert's song cycle and one in which the performers show 'complete command and understanding' (Gramophone).

For this reissue, the Prologue and Epilogue, which Schubert did not set to music, are spoken by Fischer-Dieskau and are added for the first time since the recording's original appearance on LP. Additionally, the original tapes have been remastered at Abbey Road Studios. The booklet contains the spoken/sung texts (in German) and also English and French translations.

For many there are no finer interpreters of this great work than Fischer-Dieskau, at the height of his vocal and interpretative powers in the early sixties, and his supreme accompanist, Gerald Moore, who worked with the singer for 25 years.

"...this performance, in EMI's remarkable recording, leaves one with the sense of the immortal and inexhaustible beauty of this glorious work, and awakens infinite gratitude."
(Gramophone)

"This is the young Fischer-Dieskau, unfettered and open-hearted, the voice buoyant over that unmistakable rhythmic pulse."
(The Times - October 1998)