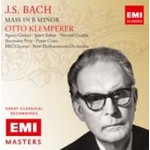 'A truly great performance, a grand design superbly realised from start to finish. The recording gives marvellous clarity to the beauty of the playing of the New Philharmonia Orchestra and the superb singing' (Gramophone)

'A truly great performance, a grand design superbly realised from start to finish. The recording gives marvellous clarity to the beauty of the playing of the New Philharmonia Orchestra and the superb singing and clear enunciation of the BBC Chorus.' (Gramophone)

"Klemperer has the balance just right in this performance - it is neither soupy and sentimental nor cold and clinical, but retains a wonderful dramatic quality without ever going overboard. The individual lines are allowed to sing out with clarity, and Klemperer's respectful approach does justice to the spirit of the piece as well as to the written music itself. Overall, this performance is full of a sense of radiance, beauty and nobility and is one I can heartily recommend."
(MusicWeb Dec 2006)

Though the reason is not known, Bach began to assemble his Mass in B minor in 1748-9. He chose and adapted music he had already written, 'drawing it into the Mass's orbit with sensitivity and skill'. Maybe Bach saw the undertaking as the summation of his life's work as a cantor-Kapellmeister and also as a statement, as he neared the end of his life, of his own belief in God and his wonder at the universe He had created.

Otto Klemperer described the B minor Mass as 'the greatest and most unique music ever written'. He first conducted the work in 1932 and commented that it was 'the hardest thing I had yet had to conduct. You cannot imagine how difficult it is chorally.' On that occasion he regretted having to use 200 singers for a work conceived for no more than 50. Thirty years later Walter Legge urged him to make a recording of the Mass using the full Philharmonia Chorus, but Klemperer demurred. After Legge's departure from EMI, Klemperer himself proposed a recording using 'authentic' forces: a choir of 48 and fewer than 50 instrumentalists.

The sessions were held in October and November 1967 and as well as securing his small group of singers (the BBC Chorus) and instrumentalists (taken from the post-Legge Philharmonia and including some particularly notable players in the obbligato and continuo roles), Klemperer and the EMI production team had assembled an impressive quintet of soloists, all experienced Bach singers, including Janet Baker, then in her prime and, according to Alec Robertson in the Gramophone, incomparable in the 'Agnus Dei'.