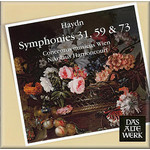 "Haydn intended to make a big effect with the opening of his Symphony No. 31, with its four braying horns, and Harnoncourt and his orchestra achieve everything that he could have wished for: thrilling, sounding forth in glorious vulgarity.

This Allegro movement - as well as the others recorded here - is notable for its directness and vitality, as the performances make the most of the contrasts with the music's more lyrical aspects. The degree to which this is done may be a source of worry for some listeners, although the option is there in the score, with the exception of the occasional liberty.

The slow movements of all three symphonies are carefully and lovingly shaped for maximum lyrical effect. There is always a painstaking attention to detail, enhancing the contrasts of dynamic shading, for example. Added to that, the standard of playing is particularly high, but with an 'original instrument' set of performances it is the more surprising that there is no keyboard continuo. In the symphonies of this period in the composer's development, the continuo always adds an extra dimension to the texture, and its absence can therefore only be a source of regret.

Harnoncourt observes repeats more scrupulously, helping to achieve an appropriate balance of structure. In the Hornsignal Symphony, there are abundant solo opportunities among the orchestra, and these are played with style and panache. In this regard this is as good a performance as any in the catalogue.

There are a few other caveats, however. Harnoncourt tends to overdo the contrasts of tempo within the symphonies, and this is at its most controversial in the minuets and trios, as though he thinks that Haydn had under-characterised the music. The Presto tempo in the first movement of the Fire Symphony is very fast indeed, risking issues of articulation. At the other extreme, the second movement, which is labelled Andante piú tosto allegretto, should surely be taken faster than the sluggish tempo adopted. The phrasing seems exaggerated too.

The recorded sound for all three performances is helpful, spacious and vivid. Although the reverberation is ample, the effect adds to the atmosphere and the richness of the orchestral sound. While there are some questions raised about some aspects of the performances, in most respects this disc offers the listener many rewards."
(MusicWeb)