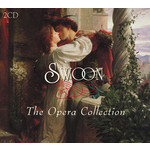 The Swoon series continues with a 2CD deluxe collection celebrating the exquisite beauty of the voice - the first time that a Swoon album has been dedicated to opera.

The album presents operatic gems from across four hundred years, bringing together arias both celebrated and little-known - sung by a roster of the world's very finest singers. The repertoire ranges from the baroque (German countertenor Andreas Scholl sings Handel's Ombra mai fù, and Pavarotti presents Bononcini's Per la gloria d'adoravi) to the classical (Mozart's Ruhe Sanft with Emma Matthews), and on to the Romantic era (Walther's Prize Song by Wagner, sung by Jonas Kaufmann, and Nicole Car singing Vendulka's Lullaby from Smetana's The Kiss) and the twentieth century (Renée Fleming in I Can Smell the Sea Air from Andre Previn's A Streetcar Named Desire).

Although this collection contains several popular operatic favourites like 'The Pearlfisher's duet' (Bizet) and 'O mio babbino caro' (Puccini) you will discover a wealth of more unusual repertoire. Great for gift giving or for your very own swoon session at home.