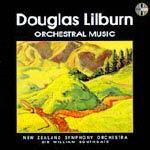 "The sound is fine. Of the playing I can only say that the New Zealand Symphony Orchestra plays as if Lilburn's music belongs to them, both when led by James Judd, or here, under the baton of Sir William Southgate."
MusicWeb Sept 2004

Douglas Gordon Lilburn was born November 2, 1915 in Wanganui, New Zealand. His first years, until 1930, were mostly spent at the family station (farm) they called "Drysdale", at which time he was sent to the Waitaki Boys' High School in Oamaru, where he received his first formal piano lessons (his first piano Sonata in C minor was composed in 1932). He enrolled in Canterbury University College in 1934, where he obtained a Diploma in Music by 1936. That same year he won a Percy Grainger prize for his first tone poem "Forest". This led his father to send him to the Royal College of Music in London, where from 1937 to 1940 he studied composition from Vaughan Williams. While there he won the colleges' Cobbett Prize for his "Phantasy for String Quartet" and his "Aotearoa Overture" was first performed during the New Zealand Centenary celebration at His Majesty's Theatre, London, in 1940. Later that year he returned to New Zealand to find that his "Drysdale Overture", "Prodigal Country", and "Festival Overture" had won prizes in the New Zealand National Centennial Music Competitions. Most of the time from 1941 to 1947 was spent in Christchurch, where compositions such as his "Prelude and Fugue in G minor" for organ, his "Four Preludes for piano", his "Landfall in Unknown Seas" and the "Chaconne for Piano" were completed. Lilburn moved back to Wellington in 1947 to take a position at Victoria University, where he stayed until his retirement in 1980.

During the '50s and early '60s he composed many more abstract styles of compositions finally resulting in his Symphony #3 in 1961. Shortly thereafter he established the Electronic Music Studio at Victoria University and devoted most of the '60s and '70s to experimenting within the electronic form. In 1967 he established the Waiteata Press as a music publishing forum, which still exists to date. Most of his scores, manuscripts, writings, recordings and others personal papers and ephemera are archived at the Alexander Turnbull Library in Wellington.

Further information can be found in "The Oxford History of New Zealand Music" by John Mansfield Thomson. The most extensive collection of his music for sale can be obtained from: Kiwi Pacific Records Ltd., PO Box 826, Wellington, New Zealand (unfortunately not available in the US). Currently (Sept. 1995) there are two CDs available in the US of his music. The Three Symphonies - Continuum 1069 (via Allegro Imports) and his Allegro for Strings, Landfall in Unknown Seas, and Diversions for String Orchestra are on Koch International 3-7260-2 H1.

Although Mr. Lilburn acquired an early love of Sibelius and had sincere regard for Vaughan Williams, he did not follow a nationalistic path, but developed a "naturistic" avenue that reflected his love of the landscapes of New Zealand. Being an avid tramper, he walked many of the treks and byways of the South Island and to this day, refers to his over-grown home lot in central Wellington as "My Jungle". His collaberation with New Zealand poets and other writers resulted in a distinct New Zealand musical art. He took seriously Vaughan Williams' advice: "Don't be clever, don't be silly, don't try to impress - search for what is valid in your intuition, your understanding, and go from that". This undoubtedly was a factor in his leaving instrumental composition for electronic. His belief in the development of a New Zealand musical tradition apart from the Victorian one that was all too common until the mid-twentieth century, was well expressed in his talk given January 1946 at the Cambridge, NZ, Summer School of Music.

Douglas passed away on June the 6th 2001