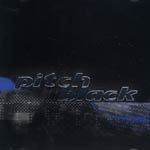 Whilst their previous album, 'Futureproof' (Spetember 1998, also under the Kog Transmissions label), was amazing, 'Electronomicon' is streets ahead again... It's a combination of musical journeys from organic ambient beginnings & layered soundscapes to skanking keyboards, cutting acid riffs & thumping rhythmic grooves, with dub the glue that holds it all together.

Pitch Black are multimedia addicts. Every gig they play is live with fully integrated visuals running off Mideo - a programme they developed to trigger video in real time.

'Electronomicon' was released in 2000 and showed the Pitch Black boys developing their deep, dubby sound further ~ employing long and involved song structures that traverse through a range of sonic experiences. Wider, deeper, shinier and funkier than anything they'd released to that point, 'Electronomicon' features the vocal talents of Caitlin Smith [Fondue Set] as well as Nick Gaffaney and Andrew Penman [Salmonella Dub]. Did someone say 'attention to detail'? I think the Pitch Black boys certainly did!

Electric Earth and Other Elements