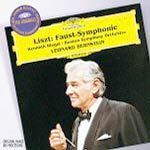 "the most compelling available reportage of an endlessly fascinating score." (Gramophone)

"DSG's absorbing booklet-note for the Leonard Bernstein release informs us that at a particular Tanglewood concert in 1941 (August 8th) Bernstein scored a triumph in modern American repertoire and Serge Koussevitzky conducted the first two movements of A Faust Symphony. Some 20 years later Bernstein himself made a distinguished recording of the work, faster than this superb 1976 Boston remake by almost five minutes yet ultimately less involving. The passage of time witnessed not only an easing of tempo but a heightened response to individual characters, be it Faust's swings in mood and attitude, Gretchen's tender entreaties or the unpredictable shadow-play of "Mephistopheles". Orchestral execution is first-rate, the strings in particular really showing their mettle (such biting incisiveness), while Bernstein's pacing, although often slower than average, invariably fits the mood. The sound too is far warmer and more lifelike than its rather opaque New York predecessor, although when it comes to the tenor soloist in the closing chorus, I rather prefer both Sinopoli's Vinson Cole and Sony's sweet-toned Charles Bressler to DG's more strident Kenneth Riegel.
As to the current Faust situation on CD, bargain-wise one might say that Bernstein's Boston recording takes first place, followed by Kurt Masur and Bernstein/NYPO in second, and Andras Ligeti's digital Naxos recording in third. Sir Simon Rattle's full-price Berlin Philharmonic recording is also recommended, though for me, Sinopoli in Dresden and Bernstein in Boston offer the most compelling available reportage of an endlessly fascinating score." (Gramophone)

ON LEONARD BERNSTEIN:
A musician of unparalleled versatility, Leonard Bernstein achieved worldwide renown in a career spanning nearly five decades - as an inspiring conductor and teacher, as a wide-ranging composer and author, as a gifted pianist.

As composer, he created a body of works extraordinarily diverse in form and style: for example, three symphonies (Jeremiah, The Age of Anxiety and Kaddish) the Serenade (after Plato's Symposium) for violin and string orchestra, Chichester Psalms for orchestra and chorus, three ballets (Fancy Free, Facsimile and Dybbuk), the score for the film On the Waterfront, and the operas Trouble in Tahiti and A Quiet Place. For the Broadway theatre, he wrote Candide and the musicals On the Town, Wonderful Town and West Side Story. His Mass: A Theatre Piece for Singers, Players, and Dancers opened the Kennedy Center in Washington, D.C., in 1971, and in 1981 became the first work by an American-born composer to be produced at the Vienna State Opera.

His later compositions include the Divertimento for Orchestra, Halil (Nocturne for flute and strings), Songfest (a cycle of American poems for six singers and orchestra) and Arias and Barcarolles. His Concerto for Orchestra ("Jubilee Games") received its world premiËre with the Israel Philharmonic Orchestra under the composer's baton, in celebration of the orchestra's 50th anniversary (1986). Dance Suite was performed in 1990 by the American Ballet Theatre and Empire Brass Quintet at the Metropolitan Opera House.

In 1983 the Houston Grand Opera presented the world premiere of his opera A Quiet Place. A revised version has been performed at the Teatro alla Scala, Milan and the Kennedy Center in Washington, and at the Vienna State Opera, where it was also recorded by Deutsche Grammophon..

Festivals of Bernstein's works have been mounted in Israel, Austria, New York and, the latter, presented by the London Symphony Orchestra, being the largest of its kind ever to honor a living musician.

The list of Leonard Bernstein's awards, prizes, honorary doctorates, foreign government decorations and other honors is far too long for inclusion here. In 1985 he received the Lifetime Achievement Grammy Award by the National Academy of Recording Arts and Sciences: he won 11 Emmy Awards (the American award for achievement in television) and his "Young People's Concerts" with the New York Philharmonic, which extended over 14 seasons have created and nurtured an entire generation of American concertgoers. His writings on music have been published in numerous languages.

Leonard Bernstein was born in Lawrence, Massachusetts, on 25 August 1918, and grew up in Boston. After graduating from Harvard University in 1939, he continued his studies at the Curtis Institute in Philadelphia with Fritz Reiner, Randall Thompson and Isabella Vengerova. His summers were spent at Tanglewood, as student and assistant to Serge Koussevitzky. Engaged by Artur Rodzinski as Assistant Conductor of the New York Philharmonic in 1943, he made his now historic, dÈbut with the orchestra on 14 November of that year, replacing Bruno Walter in a concert that was broadcast nationally. In the years following, Bernstein served as Music Director of the New York City Symphony, was head of the conducting faculty at the Berkshire Music Center at Tanglewood and Professor of Music at Brandeis University. In addition to his work with most of the world's major orchestras, Bernstein conducted at the Metropolitan Opera, La Scala (as the first American conductor ever to appear there: Cherubini's Medea, with Maria Callas) and the Vienna State Opera.

Bernstein was named Music Director of the New York Philharmonic in 1958. In 1969 he was made an Honorary Member of the Philharmonic and given the lifetime title of Laureate Conductor. In 1986 he directed a course for student conductors at the first Schleswig-Holstein Music Festival and in the following years maintained his close association with that festival. In 1987 he became President of the London Symphony Orchestra.

With the death of Leonard Bernstein on 14 October 1990, the world was deprived of one of the greatest musicians of this century.