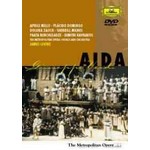 "Levine's is a stalwart reading, less flashy than Maazel's and with a finer orchestra, although he could have turned up the tempo and temperature a little for the war declaration and the tomb scene. Local heroine Millo makes a robust Aida, though her low-lying, vibrant spinto soprano could use a shade more tonal refinement, and the fiery vulnerability Chiara suggests with inferior resources. An initially tentative 'Celeste Aida', and some uncharacteristic semaphore acting, reveal that Domingo isn't on top form. He warms up for his final B flat, but again sounds unusually dry in the Triumph scene, sabotaged perhaps by his grossly unflattering costume. Pavarotti (for Maazel), stretching his strong lyric tones, scores vocally if not dramatically. Milnes, noble and incisive, is also sadly arid, but thankfully doesn't substitute bluster. Zajick's smooth mezzo is greatly preferable to Dimitrova, but she strikes too few sparks, despite Burchuladze's domineering Ramfis, and though still vocally acceptable she sounds rather stodgy, as does Kavrakos's King. Baker's Messenger shows his Heldentenor promise." (Gramophone Review)