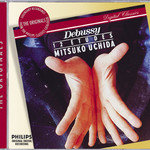 "Mitsuko Uchida's remarkable account of the Etudes on Philips is not only one of the best Debussy piano records in the catalogue and arguably her finest recording, but also one of the best ever recordings of the instrument." 'Rosette' (Highest Award) Penguin Stereo Guide

"Mitsuko Uchida's playing carries blazing conviction at every turn, and its sheer virtuosity is breathtaking . . . Vivid communication is helped by a fairly forward, resonant recording, which captures every nuance without detriment to overall perspectives . . . I found Uchida supreme in every instance, and in pretty well every department, be it refinement of sonority, accent, timing, characterisation or sheer dexterity . . . Mitsuko Uchida's 1989 recording of the Debussy Etudes made me more than ever aware of her astonishing range, vividness and articulacy . . . from the very opening, she delights in the way that Debussy takes the simple five-finger exercise and proceeds to subvert it with utter imagination and virtuosity. The way that she builds to the final climax, drawing from the keyboard a simply orchestral range of sonorities, is jaw-dropping . . . Each Etude occupies a world of its own in Uchida's hands, and even though they're totally abstract, she's such a storyteller that I find myself imagining hidden scenarios in each one . . . Uchida's pianistic command is so formidable that nothing obtrudes between composer and performer, between creator and recreator . . . But it is in the final "Pour les accords" that she achieves her greatest triumph. It's so fast and fearless . . . this is a classic that is as astounding today as it was 25 years ago."
Record Review / David Fanning, Bryce Morrison, Harriet Smith, Gramophone