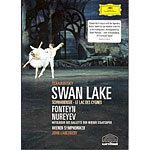 "A must-have video for balletomanes, but for the rest of us it might not be the best choice for our only version to own" (MusicWeb June 2005)

"A must-have video for balletomanes, but for the rest of us it might not be the best choice for our only version to own"
(MusicWeb June 2005)

"This is the best film record yet of this great dancer in action; and, even though Odette-Odile has to share the honours more evenly than usual with her Siegfried, it also shows Fonteyn to great advantage. The film has been beautifully dressed and decorated by Nicholas Georgiadis, and it has been well made - an honest-to-goodness account of splendid dancing."
-Miscellaneous / James Kennedy, The Guardian (London) / 30 July 1968

"Another example of the cinema's usefulness in recording for ever classic ballet performances before it is too late. This is "Swan Lake" in Nureyev's version, photographed in more pleasant colour than is usually the case and giving those who have never seen Nureyev and Fonteyn on stage a very reasonable opportunity to enjoy them on screen."
-Miscellaneous / The Times (London) / 01 August 1968

"What emerges is a satisfying blend of theatre and cinema. With tasteful restraint, the film shuns all temptations to enhance the magic with trick photography, and what magic there is can be found at source: in Tchaikovsky's music."
-Miscellaneous / Sunday Express / 04 August 1968

"This film provides the chance to see two of the most notable artists in partnership. Essential viewing for ballet fans."
-Miscellaneous / Kinematograph Weekly / 24 August 1968

"No matter how many ballet lovers have watched "Swan Lake" on the stage, they must see the new film version. Rudolf Nureyev's sensational handling of an unforgettable final scene is far different from the usual stage performance."
-Record Review / People / 04 August 1968

Featuring members of the Vienna State Opera Ballet, and the Wiener Symphoniker, conducted by John lanchbery.