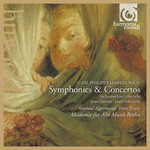 "This is playing to take the breath away."
International-Record-Review

"This is playing to take the breath away."
International Record Review April 2001

"The sheer sound of the AAMB is itself worth comment, for there is an impressive depth founded on a sonorous and clearly etched bass line, and warm but beautifully articulated playing from the upper strings."
- Fanfare

"I defy even the most hardened Period Instrument rejectionist to resist the power and brilliance of these players."
- American Record Guide

At the end of the 18th century, the most famous member of the Bach family was not Johann Sebastian, but his son, Carl Philipp Emanuel! This prominent representative of the school of German, and more especially Prussian composers, a pioneer of Empfindsamkeit (the cult of "sensibility"), was prized above all for what his contemporaries termed his "originality" - by which they meant the sovereign ease with which he forged his own style. To understand this, one need only listen to the nine symphonies from his Berlin period, whose radical departure from traditional forms symbolises a stylistic revolution in itself. As for his innovative treatment of the concerto, which overturns all the principles of symmetry so dear to Baroque composers, it seems already to prefigure Romanticism.