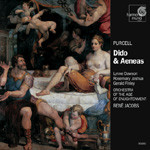 "There's no shortage of first-rate Didos on the market. So do we need another one? Yes, when the direction and cast are as strong as they are here...a compelling Dido...Recommended."
- International Record Review March 2001

"A superb performance of Purcell's opera, marrying superb singing with René Jacobs' elegant and imaginative handling of the score. The soloists are outstanding, the drama as powerful as ever....An uninhibited and richly coloured Dido with a starry cast - arguably the first truly persuasive account from a continental director - puts this account in the top bracket of current recordings."
- Gramophone Editor's Choice - March 2001

The masterpiece of English opera.
It was probably in 1684-85, a year or two after the first performance of John Blow's Venus and Adonis which was clearly his model, that Purcell composed Dido and Aeneas, now recognised as one of the great monuments of opera. The sudden death of Charles II, for whose court it was commissioned, may have meant it was not actually produced until the performance given in a girls' school in Chelsea in 1689, long thought to have been the occasion for which it was written. The skilful construction of Dido and Aeneas, with that rich mixture of comic and tragic elements so characteristic of 17th century English theatre, perfectly illustrates Purcell's extraordinary dramatic sense.

"Rene Jacobs's new version stands out for its gripping theatrical urgency....Lynne Dawson is magnificent as Dido, singing her two arias with intense, plangent tone, broad phrasing and a piercing directness. Even if you own another Dido, this recording will enhance your appreciation of this first masterpiece of English opera."
The Daily Telegraph

"...the quality of the singing is first-rate. Finley is an unusually velvety Aeneas, and Dawson's 'Lament' is as moving as any."
The Observer Classical CD of the Week