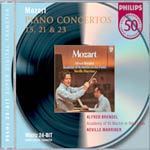 Outstanding value - three of Mozart's sunniest piano concertos performed by the team responsible for some of the finest Mozart keyboard recordings ever made and a reminder of Alfred Brendel's mastery of the Mozart piano concerto, with sparkling accompaniment from Neville Marriner.

"Elegant", "stylish", "outstanding", "ravishing" and "magical" are some of the critical comments that these celebrated recordings have attracted over the years.

No.15 in B flat, with its two cheerful outer movements and hymn-like second, is rated as the most difficult to play of all Mozart's 27 piano concertos. No.21 in C has the sublime second movement used in the 1967 Swedish film Elvira Madigan (hence the concerto's present-day nickname). No.23 in A has one of Mozart's heart-felt and moving slow movements immediately followed by a finale that bubbles over with exuberant high spirits.