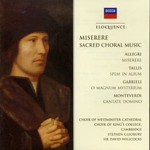 A wonderful collection of meditative choral music, spearheaded by Allegri's ubiquitous Miserere and including works by other Renaissance composers, including the magnificent Spem in Alium by Thomas Tallis, performed by two of the foremost British choirs under the direction of two of Britain's leading choral conductors - David Willcocks and Stephen Cleobury.