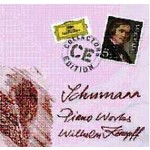 Kempff began his piano studies with his father (also named Wilhelm Kempff), one of a distinguished family of church musicians. From the age of nine the young Kempff studied piano and composition at the Berlin Academy for Music. He later also studied philosophy and music history. In 1916 he launched his musical career as a pianist with the Berlin Cathedral Choir, touring Germany and Scandinavia, and in 1917 he gave his first performance as a soloist with the Berlin Singing Academy (Singakademie). Tours to Europe, South America, and Japan followed. He directed the Stuttgart Music Academy from 1924 to 1929, and from 1931 to 1941 he taught summer piano classes at the Marmor Palace in Potsdam. He first performed in London in 1951 and made his debut in the United States in 1964. He gave his last recital in Paris in 1981.

In addition to musical compositions in a variety of genres, Kempff wrote an autobiography, Unter dem Zimbelstern: das Werden eines Musikers (1951; "Under the Cymbal Star: The Development of a Musician").
ENCYCLOPÆDIA BRITANNICA

"He is a guide to Schumann . . . authoritative and companionable, balanced and most human" Gramophone

"this anthology celebrates Kempff's special feeling for Schumann. He is in his element in pieces like Arabesque, the relatively little-known first and third Romances, and the Novelettes, where he inspires an element of fantasy...The Konzertstuck too, not one of Schumann's most inspired pieces, is played most persuasively, with Kempff's magic leading the ear on." Penguin Guide