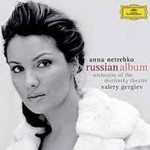 "Anna Netrebko frames her recital with the two great heroines of Russian 19th- and 20th- century opera: Tatyana in Tchaikovsky's Eugene Onegin and Natasha in Prokofiev's War and Peace. …Netrebko gives the characters' contrasted moods of anxiety, Natasha full of foreboding, Tatyana bursting with youthful hope. Her soft singing is exquisite and there is none of the edginess in the voice that can sometimes mar Slavonic sopranos. The songs by Rachmaninov and Tchaikovsky are heard in rather overblown orchestral arrangements, but Netrebko sings them all with ravishing tone. The Mariinsky Orchestra and Gergiev are, of course, in their element, and the recording, especially the balance between voice and orchestra, is fine throughout. This is the best disc Netrebko has made so far and should make many new friends for Russian opera." Gramophone

"soprano Anna Netrebko here sings a glorious selection of her native Russian music . . . Looking like a believable romantic beauty doesn't hurt; nor does having the voice of a dirty angel. How a slip of a girl produces such a rich sound is a mystery, but the mix of sensuality and purity is delicious." Observer

"her latest record confirms her stature as a genuine and serious artist . . . [the arias & songs] suit Netrebko¿s bright-edged Slavonic soprano to perfection. The radiant top register is the glory of this voice, compensating for a lack of colour in the lower notes that robs her singing of variety, and she is an idiomatic interpreter . . . Her timbre combines girlishness and dramatic power, whetting the appetite for her Tatyana. Gergiev¿s accompaniments are first-rate." Times

"She is young, with real presence in the theatre, and with a voice that seems to know no fear . . . Francesca's aria "O weep not, my Paolo" from Rachmaninov's "Francesca da Rimini" is opulent and beautifully sung by Netrebko. As Antonida in her Act 1 Cavatina and Rondo from Glinka's "A Life for the Tsar" she lightens the voice to considerable effect. This is indeed a young woman waiting by the river for her man to return . . . that makes Netrebko such an exciting singer in the theatre. Too often she slips into dreamy reveries. There's fine soft singing in Rachmaninov's song "Sing not to me, beautiful maiden" and a melting tone in Marfa's Act 4 scene and aria from Rimsky-Korsakov's "The Tsar's Bride" . . . [Gergiev] is a generous collaborator. The perky little waltz that dances its way through Natasha's visit encounter with Anatol in "War and Peace" is as sweetly ironic as Prokofiev would have wanted." International Record review

Glinka:
V pole, pole, cistoye glyazu (from A Life for the Tsar)

Symphony no. 2 / Symphony No 11
more suggestions…