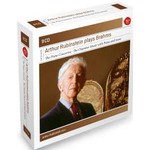 "there is superb Brahms-playing in this release, and little worry need be expended on account of the age of the recordings."
(Gramophone)

"The F minor Piano Sonata, recorded in 1959 when he was already 72, has a disarmingly youthful vigour, and although the all-important maestoso elements are impressively done, the work is allowed to reflect the hesitancy of the young Brahms, as well as his confidence. The delicacy of the rising and falling motif in the Andante has no hint of affectation.

Rubinstein scrupulously adheres to the staccato markings in the third movement, and it is only in the very taxing coda of the finale that he doesn&apos;t quite reach the necessary tempo indication of presto. There is some falling-off of tension here. The recording of the four Ballades, Op. 10 dates from 11 years later, and on hearing them I was particularly struck by the quality of sound I had just enjoyed in the sonata: the engineers have achieved a uniformity of piano tone throughout the CD that is quite a testament to RCA's techniques of the period.

The Ballades are more assertive than one might have predicted, with No. 1, Edward, leaving its usual broodingness far behind. In No. 3 Rubinstein underlines the dissonances to heighten the capricious effect. Whilst I cannot remember hearing the opening melody of the last piece played with a more perfect arc in its line-this is one of my favourite Brahmsian themes-it is sad that the remainder of the piece emerges as overlong here and a bit of an anti-climax. Nevertheless, there is superb Brahms-playing in this release, and little worry need be expended on account of the age of the recordings."
(Gramophone on the Sonata, Intermezzi & Ballades)

While the rest of the world thought of him as a Chopin expert, Rubinstein himself claimed Brahms to be his favorite composer. His exposure to the composer, although indirect, came early through his childhood mentor Joachim, who was a close personal friend of Brahms and the dedicatee of his Violin Concerto and "Double" Concerto for violin and cello (and played the world premiere of both works under the composer's baton). The Sonata and Ballades are both youthful works, and it's thrilling to hear a youthful pianist like Julius Katchen launch into them boldly. Rubinstein, though, plays them comfortably alongside later Brahms, enobling them with splendor and richness.
(Classical Notes)