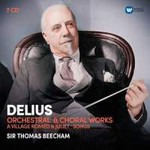 "No conductor has yet surpassed him in conjuring up to sheer perfection the hidden beauties of Delius's scripts." Those were the words of Eric Fenby, Delius's aide and amanuensis, on Sir Thomas Beecham, a tireless and eloquent champion of the composer's music. This wide-reaching collection extends from much-loved works closely identified with Beecham to more rarely-heard pieces that he only recorded once.

"Beecham's history of Delius exegesis can be viewed through his earliest efforts in the studio (EMI, Naxos and Somm), through to his electric mono era (1940s and 1950s on Sony) to these, his late stereo tapes (1950s and early 1960s for EMI Classics). We are encouraged to regard his Delius as sui generis and in many ways it is - he helped create and re-create many of the works, after all - but forgotten German champions who had fallen away might just as easily have carved a place in the sun for Delius's music. I do not exalt Beecham recordings in quite the same way as many others. For later generations (and still worse for those who were of Beecham's own generation) going into the recording studio was often a critically thankless task. Reviewers would always compare with Beecham.

Summing up: Beecham's Delius in stereo. This will be enough for most of you to reach for your credit or debit cards." (MusicWeb)

"A record to treasure. The greatest recordings made in stereo by the greatest British conductor at the peak of his career." - Gramophone

Over the hills and far away
Sleigh Ride
Brigg Fair
Florida Suite
Marche Caprice
Dance Rhapsody No. 2
Summer Evening
On Hearing the First Cuckoo in Spring
Summer night on the river
A Song before sunrise
Fennimore and Gerda: Intermezzo
Irmelin Prelude
Songs of Sunset
Dance Rhapsody No. 1
Violin Concerto
Piano Concerto in C minor
On the mountains
A Mass of Life
A Village Romeo and Juliet
Sea Drift
In a Summer Garden
Hassan: excerpts
Koanga: four excerpts
Appalachia (Variations on an old slave song)
Eventyr (once upon a time)
A Song of the High Hills
Paris - Song of a Great City
Selected songs

Symphony No 5 / Serenade To Music / etc