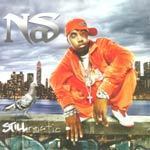 This is the fifth album from premiere hip-hop lyricist, Nas.

Nas has been long hailed as one of the premiere lyricists in Hip-Hop and with his eagerly-anticipated fifth album, is back to make the rap world his once again.

Since his debut with the brooding poetic masterpiece "Illmatic" Nas has continued to raise the bar for Hip-Hop with a string of platinum albums.

On his new release "Stillmatic", Nas returns with his boldest album to date.

His understanding of urban politics and social pressures make him the ultimate street journalist, and his impeccable musical standards leave room for only the true head-nodders.

"Got Ur Self A…" is the first radio single off the album and is currently receiving airplay on days on Mai FM.

"Stillmatic" promises to be Nas' first classic of the new millenium.

Stillmatic (The Intro)
Ether
Got Ur Self A...
Smokin'
You're Da Man
Rewind
One Mic
2nd Childhood
Destroy & Rebuild
The Flyest
Braveheart Party
Rule
My Country
What Goes Around
Every Ghetto