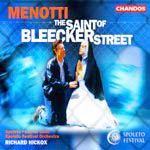 Chandos is pleased to announce the long-awaited release of Menotti's Pulitzer Prize-winning The Saint of Bleecker Street.

This is the only available recording of this important work.

The work was recorded live at last year's Spoleto Festival under the direction of the Festival's director, Richard Hickox.

Welsh tenor Timothy Richards has performed in concert, opera and oratorio across Europe. He has made numerous television appearances and his recent performance in Rossini's Stabat Mater was broadcast on Radio 3.

The Saint of Bleecker Street is a powerful drama with an accessible and direct musical idiom, but it is appreciable on another level too. Menotti refers to his operas as 'metaphors for moral or philosophical issues' and The Saint of Bleecker Street is no exception. Menotti describes how the work deals with the irreconcilability of spiritual faith and doubt: 'the love between Annina and Michele is simply a metaphor for my own soul, because I have two natures in myself. One is the believing and the other is the doubting. Annina and Michele love each other, because I would love to be able to believe, but at the same time I cannot renounce the other side of me that is logical.'

The Saint of Bleecker Street is set in New York's Little Italy. Neighbours crowd around the bed of a sick young girl named Annina who has been having visions and is believed to have miraculous powers. Annina's impetuous brother, Michele, is the only unbeliever. He deems her visions to be the hallucinations of a sick mind. Protective of his sister, he attempts to stand between her and the 'hysterical' piety of the local community. Michele's girlfriend, Desideria, tauntingly accuses Michele of being in love with his sister. Enraged, Michele kills her. In the final scene Annina prepares to become a nun. As her investiture draws to its completion, Michele rushes in, beseeching her to return to the world. It is too late. Annina sinks to the floor and dies. Michele leaves slowly, defeated but still defiant.

A Cotswold Romance / The Death of Tintagiles