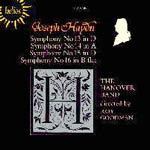 'An impressive addition to a fine series. Recommended with enthusiasm' (CDReview)

Despite their numbering, the present four symphonies were not written consecutively. Their order of composition is more likely to be the reverse - 16, 15, 14, 13, with the second two post-dating the former pair by two or three years - but all being representative of works written for two of Haydn's principal employers, the Morzin and Esterházy families.

The Morzins gave Haydn his first position in the important role of Kapellmeister (literally, head of the chapel music, or music master of the household). The count and his family divided their time between a summer castle in Bohemia and a town house in Vienna, though most of Haydn's time was spent at the former residence. Morzin's orchestra was relatively small, but he also employed a wind band (oboes, bassoons, horns, trumpets and timpani) whose players joined the strings of the orchestra when required. It was for this enlarged ensemble that Haydn composed some dozen or more symphonies, including Nos 15 and 16 (they are in fact closer to 7 or 8 in number), between about 1759 and 1761 when financial problems forced Morzin to disband his orchestra and Haydn took up his appointment with the Esterházys.

Symphony No 15 is one of the most interesting works from this period. Its first movement is unusually in the style of a French overture, a form marked by it's A-B-A, slow-fast-slow structure with, here, extensive Adagio sections framing a lively Presto. The second movement also has a French character to it, particularly in the dotted rhythms of the main Minuet section. The finale is again a Presto and shows Haydn's nascent mastery of instrumentation and formal ingenuity.

Symphony No 16 is no less fascinating a work. Again in three movements, here they are more straightforward in layout, though no less striking in content. The first movement, for example, already shows Haydn's penchant for monothematic symphonic movements, with the main contrapuntal theme of its opening providing all the motivic material he requires to produce a cogent and coherent Allegro. The slow movement for strings alone is by contrast much less intense and is marked by the doubling at a lower octave of the main violin theme by a solo cello throughout. The excitement returns with the 6/8 Presto finale, one of the first manifestations in his symphonies of Haydn's predisposition to musical wit.