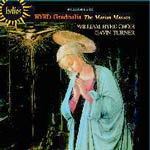 'The singing is exquisite, the balance always right (Fanfare, USA)

'The singing is exquisite, the balance always right, the intensity of devotion always present'
(Fanfare, USA)

'Just for fun I listened to all nine Alleluia settings one after the other and was astonished at the variety and interest of the music ... Byrd at his most impressive and sublime here in the glorious Nunc Dimittis and in the delicate intricacy of 'Optimam partem'. The recording and performances are superb'
(BBC Music Magazine Top 1000 CDs Guide)

WILLIAM BYRD, the leading composer in Elizabethan England, appears to have retired from active life at court around 1593, his fiftieth year. He moved his family from Harlington (near the present Heathrow airport) to a village on the other side of London deep in the Essex countryside. His new home at Stondon Massey was a few miles from Ingatestone, the more private of the two Essex seats of a landed magnate named Sir John Petre, one of Byrd's richest patrons. Like Byrd and his family, the Petres were Roman Catholics, and Ingatestone was a protected centre where the Roman liturgy could be celebrated with little interference from hostile authorities. Byrd's move also marked the beginning of a new phase in his composition. Motets of protest and tribulation, written in an expansive and often madrigalian style, and clearly aimed at the situation of the Roman Catholic minority in England, had been characteristic of the Cantiones Sacrae of 1589 and 1591. From 1593 onwards Byrd conceived and brought to completion an ambitious plan to provide music for the Roman liturgy (and for extra-liturgical devotions) in a more concentrated, terse style that in many ways suited the requirements of the Catholic reformers, especially the Jesuits to whom he seems to have been especially close.

The first works he completed in this characteristically thorough scheme were three settings of the Ordinary of the Mass, in three, four and five parts, published between 1593 and 1595. But the culmination came a decade later with two books of a collection entitled Gradualia and published in 1605 and 1607. The principal contents of these volumes are the Propers of the Mass (Introit, Gradual, Alleluia or Tract, Offertory, Communion, and sometimes the Sequence) for each of the principal feasts of the Roman Church year as well as for the votive Masses of the Blessed Virgin and the Holy Sacrament. One of the most notable features of this collection is that the texts are always those of the reformed Roman Missal of 1570. Byrd makes no attempt to rehabilitate the Sarum rite which was observed in most places in England before the Reformation and again during the reign of Mary I - even though he had paid direct tribute to England's Catholic musical past by self-consciously making specific musical references to a Mass by John Taverner (c1495-1545) in his own four-part setting of the Ordinary. Characteristically for someone allied with the Jesuit party, however, his Gradualia eschews religious nostalgia for a rather strong dose of the militant spirit associated with Catholic reform.