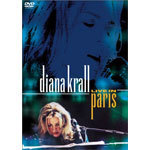 Recorded live at the Paris Olympia to a sell out audience, the captivating voice of Diana Krall delivers a sensual collection of romantic ballads and bossa novas.

As well as her own recording jazz band members who were flown in especially from L.A., Diana is accompanied by the Orchestre Symphonique Europeen and the Paris Jazz Big Band. In addition to this she also welcomes legendary conductor Claus Ogerman.

This concert performance features tracks from her album 'The Look Of Love' and the full set from her sensational world tour.

Bonus Videos:
1. The Look Of Love
2. Let's Face The Music and Dance

+ Exclusive Rehearsal Footage:
1. Do It Again
2. The Look Of Love
3. Love Letters

When I Look In Your Eyes
more suggestions…