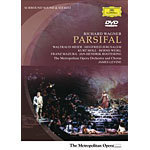 "Meier's Kundry is electrifying ... she simply is Kundry, having thought herself voice, body and soul into the part, a wholly remarkable achievement which is the stuff of legends"
(Gramophone)

The Schenk / Levine MET production from 1991 featuring such well-known Wagner singers as Waltraut Meier, Siegried Jerusalem, Kurt Moll and Bernd Weikl is one of the very rare DVD releases of this opera.

In Search of Beethoven