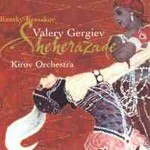 1001 Recordings you must hear before you die

"Gergiev in the opera house is a force to be reckoned with - a dynamo of energy and stamina. In the concert hall he can raise the same levels of adrenalin as here on a disc of popular Russian favourites. His performance of Rimsky's much-played Scheherazade is a real ear-opener, a reading of raw energy and thrilling playing from his Kirov Orchestra and some superb solo violin work from Sergei Levitin. Balakirev's Islamey is another treat in its orchestral guise (courtesy of Lyapunov)." (Gramophone)

"[Gergiev] bring[s] out Rimsky's crystalline solo textures, such as the passages for solo cello, horn and woodwinds in the first movement. And if tempos are slow in the first three movements, Gergiev makes up for lost time in the fiery, bristling fourth, which becomes a tour-de-force for an orchestra clearly at the height of its powers" (BBC Music)

This new release marks the first time that Valery Gergiev has recorded any of the featured works which includes one of the most well-loved and popular works of the Russian repertory. The recording took place at the Mariinsky Theatre in St Petersburg in November 2001. Gergiev's dramatic and theatrical conducting style together with his well established working relationship with the Kirov Orchestra always make for thrilling listening and this recording is no exception.

The key piece of this collection is the symphonic suite Sheherazade. Of the variety of orchestral works by Rimsky-Korsakov, Sheherazade is one of the best-known and most popular. It is based on the tales told by Princess Sheherezade (represented by a solo violin), in her effort to postpone the sentence of death declared on her by her master, the Sultan.

In the Steppes of Central Asia is one of Borodin's most popular works. It was composed in honour of the Tsar Alexander II's Jubilee and is a vivid musical evocation of an exotic region.

Islamey was originally an "oriental fantasy for solo piano" which Balakirev dedicated to Nikolai Rubinstein who played it for the first time at a Free School concert in 1869. This release contains a recording of the orchestrated version.

Rimsky-Korsakov: Sheherazade, op.35 (Symphonic Suite)
1 The Sea and Sinbad's Ship
2 The Story of the Kalendar Prince
3 The Young Prince and Princess
4 Festival at Baghdad - The Sea - Shipwreck - Conclusion

5 Alexander Borodin: In the Steppes of Central Asia

Piano Concertos Nos 1 - 4 / Rhapsody on a theme of Paganini