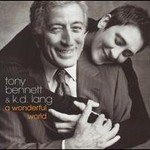 Tony, the King of Swing & K.D. Lang, the Queen of Torch, celebrate the life and works of musical legend, Louis Armstrong.

"Tony is the King of Swing... K.D. Lang is the Queen of Torch... put the 2 together and you have a dynamite album of Satchmo's greatest songs!"
- Roger Marbeck

Friends and famed Grammy Award-winning superstars Tony Bennett and K.D. Lang come together to bring us "A Wonderful World" - an album that celebrates the life and works of musical legend, Louis Armstrong.

Tony Bennett is himself a true living musical legend - having sold over 30 million albums during a career spanning over five decades.

K.D. Lang is an artist with a fervent fanbase who also has a very strong proven sales history.

Produced by T Bone Burnett ("O Brother Where Art Thou", "Divine Secrets of the Ya-Ya Sisterhood"), the album consists of twelve Armstrong classics as interpreted by Tony and K.D. with both duet performances and solo renditions.