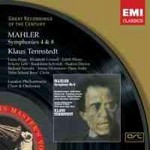 "Tennstedt's broader, grander view with the extra range and richness of the modern EMI recording, coping superbly with even the heaviest textures." (*** Three Stars Penguin Guide)

"Tennstedt's broader, grander view with the extra range and richness of the modern EMI recording, coping superbly with even the heaviest textures. The great glory of (this) set is the singing of the London Philharmonic Choir, assisted by the Tiffin School Boy's Choir."
(*** Three Stars Penguin Guide)

'This Symphony of a Thousand is one of the superlative Mahler performances on record. It is very moving and the choral singing and orchestral playing are magnificent. As a rounded and convincing account of this difficult piece, it will not easily be surpassed. The reading of the Fourth Symphony is outstandingly idiomatic and extremely well played.'
(The Gramophone)

When Klaus Tennstedt died in January 1998 at the age of 71, the musical world lost one of the great conductors of the day, a maestro worthy to rank with Wilhelm Furtwängler and Otto Klemperer as an interpreter of the Austro-German classics. It was in this repertory that he was pre-eminent, and most of all in the symphonies of Gustav Mahler, a composer he regarded, alongside Mozart, as 'the greatest genius who has ever lived'.

Born in Germany, Tennstedt was virtually unknown outside his home country and Scandinavia until he was acclaimed on a tour of North America in 1975. When Boston, Toronto, Cleveland, Chicago and New York clamoured for him, EMI and the London Philharmonic were quick to bring him to the UK, where he established a lifelong relationship with the orchestra and embarked with them on EMI studio recordings of the complete Mahler symphonies.

Though his last years were dogged by ill health, Tennstedt became a revered figure, particularly in Britain, and his recordings and performances of Mahler achieved a cult status. This reissue in the Great Recordings series features the two studio recordings of Mahler that are generally regarded as the finest of all: the 4th (with the delectable Lucia Popp as the soloist) and the monumental 8th.

I Am A Bird Now