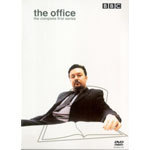 BAFTA winning comedy about the Slough paper-merchant where life is stationery… David Brent (Ricky Gervais) is a petty, pompous boss who thinks he's the funniest, most popular man in the world.

Tim (Martin Freeman) really is popular and funny but the joke is on him, as he's stuck in the middle of this little world - a world in which he hates everything except the receptionist Dawn. Will Tim escape? Will Dawn choose the right man? And will David Brent ever regret letting a film crew into The Office.

"Original and accurate and painfully funny: it will have every office in the country twitching with spasms of recognition... This is a gem."
-The Times

"I suppose I've created an atmosphere where I'm a friend first and a boss second... probably an entertainer third."
-David Brent

This release features all six episodes from Series One of Ricky Gervais' The Office...

Episode 1 :-
David Brent learns that his branch of the paper merchants might be closed down. But he promises his staff, that under his regime there will be no redundancies.

Episode 2 :-
Donna arrives on work experience. But a dirty picture of her boss that's been e-mailed around the office dominates her first day at work.

Episode 3 :-
It's Tim's birthday. But it's also the annual quiz night. Will Brent and Finchy be able to beat the young pretenders Tim & Ricky?

Episode 4 :-
Rowan, a management consultant, has come to Wernham Hogg to give the staff a special training day.

Episode 5 :-
Even though some of the staff may be made redundant, Brent decides to take on a new secretary. Naturally, he chooses the prettiest woman.

Episode 6 :-
It's judgement day on whether the office is to be downsized.

Includes :-
-40-minute documentary "How I Made the Office" by Ricky Gervais. Specially produced with Ricky Gervais, Stephen Merchant and key cast members, it discusses how the series was conceived and includes personally memorable sequences, out-takes, footage and commentary of pre-pilot and pilot episodes.
-Full length Peter Pervis Staff Training Video as featured in Episode Four.

American IV - The Man Comes Around