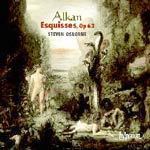 "'It is with an element of bemusement that I find myself writing this introduction to an album of Alkan piano music, because two years ago I would have thought myself as likely now to be selling baseball cards on the Shopping Channel.' The opening sentence of pianist Steven Osborne's note to this remarkable new recording sets the tone - and clearly a sense of humour (and a nifty set of fingers) is a prerequisite for tackling this unique and subtly enchanting music."
- Editor's Choice (Gramophone September 2003)

'Osborne has a delightfully varied touch that brings out the character, wit and invention of these often exquisite and tantalisingly short and familiar pieces' (Inverness Courier)

'having introduced these Esquisses to us, Osborne deserves our gratitude … While they still hold material that will test the pianist, they are often sublime, requiring a performer of the utmost sensitivity, and in Osborne they find the perfect exponent' (Hi-Fi Plus)

The renaissance of interest in the reclusive and eccentric 19th-century French composer Alkan has been one of the more interesting developments of the last part of the 20th century but it has usually been his massive and virtuoso works (the symphony and concerto for solo piano for example) which have made the biggest impression. Throughout his life though Alkan was also a miniaturist, as 25 Preludes and six books of Chants show, and this interest culminated in undoubtedly the greatest of these cycles, the Esquisses (sketches) here recorded. This set of 48 pieces plus a final Laus Deo runs through all 24 keys twice with the Laus Deo returning the double cycle to C major. A huge range of mood and colour is represented from simple folk song to etude, not forgetting the bizarre, as can be seen in the tone clusters of Les Diablotins or the schizophrenic Héraclite et Démocrite.
This cycle has only been recorded complete once before. With Steven Osborne applying his colour, virtuosity and interpretive insight we are confident Hyperion have produced a recording that will permanently raise the stature of these pieces in the musical world and add a significant milestone in the Alkan discography.