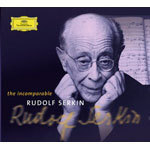 Rudolf Serkin (1902-1991), one of the great masterpianists of the 20th century, would have celebrated his 100th birthday on 27 March 2003. To celebrate this occasion DG have put together a beautiful twofer containing some of his most memorable recordings for Deutsche Grammophon.

The album is called "The incomparable Rudolf Serkin" because Serkin did offer something unique in his art: a seriousness and profundity of approach. As one writer put it, he is a "paragon among pianists of the mid-20th century".

CD 2 displays his gifts as a concert pianist and accompanist, in marvellous collaboration with two premier DGG artists. First, the best-recommended version of the Brahms E minor Cello Sonata with Rostropovich. This is followed by one of the highlights of the well-known Mozart Piano Concertos series with Claudio Abbado, K. 451 in D major, a magically beguiling performance.

There are plenty of photos of the artist and his artistic collaborators in the booklet and packaging, and there is a newly commissioned article by expert Jeremy Siepmann (see Insights) on this incomparable artist, plus Rudolf Serkin's current DGG discography.