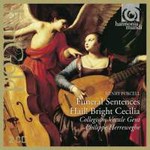 Coupled here are Philippe Herreweghe's two major Purcell recordings: the Funeral Sentences and a selection of full and verse anthems, was acclaimed by the American Record Guide for its "clarity and precision of English diction and outstanding choral intonation' combined with 'consistently beautiful" solo singing. Five years later, the maestro directed his virtuoso Collegium Vocale Gent in two highly contrasting glorifications of the art of which Purcell was a supreme master. Whether with the small forces of 'Welcome to all the pleasures' or in the vocal and orchestral pyrotechnics of 'Hail! Bright Cecilia', here is a genuine festival of music. These titles were released for the first time in 1993 (CD1) and 1998 (CD2) and have not been available for some time.

Sumptuous musical feasts!
Two Odes composed for the Feast Day of Saint Cecilia in 1683 and 1692; two very different was of treating the glorification of an art form in which Purcell was the master. Welcome to all the pleasures calls for a relatively small formation and seems to have been concieved entirely in the Italian style (if not for Italian use). Eight years later, Hail! bright Caecilia turned out to be a fabulous hymn to music, as rich and varied as the act of an opera - a veritable Baroque fireworks which is among Purcell's greatest achievements

"These are beautiful performances...invigoratingly sculpted by Herreweghe...Indeed, the new disc deserves the blessing of Cecilia herself." - Classical Insites

"If there are 'two bars of Purcell' which melt marble then 'one perfect harmony' at the close of 'Soul of the world' reveals an intrinsic care in Collegium Vocale's exquisitely conceived vocal line, a blooming legato where Herreweghe inspires passion from the power of the minimum dose. The long opening instrumental music is contained and noble, juxtaposing light-footed articulation with intimate asides. The whole is infectiously fresh and never rushed...For beauty of sound, Herreweghe is your man." - Gramophone

"The sheer vitality-and the range of colour and character that Philippe Hereweghe and his musicians draw out of this music- makes these performances irresistible … beautifully sung and played." (International Record Review)