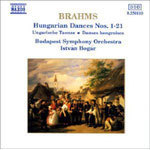 "One would rather have this set of dances than any of the other alternative versions."
Rosette (Highest Award) Penguin Stereo Guide

"Brahms Hungarian Dances in wonderfully relaxed. idiomatic performances, full of wit and elegance, make up a delightful CD from Istvan Bogar and the Budapest Symphony Orchestra - the absolute antithesis of the glamorous, high powered, super conductor performances we so often hear."
- WHICH COMPACT DISC? - July 89

"Bogar's Brahms is wholly enjoyable with stylish string playing and crisp woodwind solos from the Budapest orchestra. These lively performances, full of charm and good humour, should brighten the dullest day."
- Brian Higgins

"One would rather have this set of dances than any of the other alternative versions."
- Penguin Guide

"...one of the audio bargains of the decade."
- Sunday Sun Herald, Melbourne (Australia)

Johannes Brahms was born in Hamburg in North Germany, and his ambition for many years was to return to his native city to occupy some substantial position in the musical establishment. His childhood had been spent in poverty, and it was natural that he should wish to be seen to have succeeded in the eyes of his fellow-citizens. This particular triumph, however, eluded him, and he was finally to settle in Vienna, where he became a dominant figure in the musical life of the imperial capital.

Hamburg is, of course, a world away from Hungary, which formed part of the Hapsburg Empire. In 1850, however, Brahms met the Hungarian violinist Remenyi, who introduced him to something to the music of Hungary, and particularly to the music of the Hungarian gypsies. Brahms and Remenyi toured together in 1853, but the latter, with an eye to his career, was disappointed by the reaction of Brahms to the great Hungarian composer Liszt, who held court in Weimar and had been gracious enough to receive them. The two parted company, and Brahms took advantage of an invitation from another Hungarian violinist, Joseph Joachim, who was to continue as a friend and mentor for years.

Brahms continued to show an interest in Hungarian gypsy music, failing, by and large, to distinguish the gypsy from the Magyar. His fascination was shown as early as 1853, the year of his meeting with Robert Schumann, when he wrote a set of variations on a Hungarian theme. His Violin Concerto has a Hungarian gypsy turn to its Finale, and he was to set, in 1887, a series of translations from Hungarian in his Gypsy Songs for vocal quartet and piano. The most popular of all works that he wrote in Hungarian style, however, were the Hungarian Dances, composed originally for piano duet, and appearing in four sets, the first two issued in 1869 and the second pair in 1880.

The Hungarian Dances were to win immediate popularity. The piano duet was, in any case, a form much in use, providing a useful element in domestic entertainment, as well as serving a more professional purpose as a means of performing transcribed orchestra works. The Hungarian Dances were subject to the contrary process, and Brahms himself orchestrated the first, third and tenth in 1885. The Czech composer Antonin Dvoøák, to whom Brahms had given early encouragement, orchestrated the last five, and did the same for his own piano duet Slavonic Dances. Other arrangements for orchestra were made by the Russo-German composer Paul Juon, the Swedish conductor Hallen, the bandmaster Parlow and others.

The dances themselves make use of gypsy melodies, although there are three original compositions by Brahms, Nos. 11, 14 and 16. In general the later sets issued in 1880 have about them more of Brahms than of Hungary, and, perhaps as a consequence, were to prove slightly less popular. Within the prevailing idiom the dances have considerable variety and marked rhythmic interest. It seems that Wagner had the Hungarian Dances partly in his mind when he wrote with his usual acerbity "I know famous composers that you can meet at concert masquerades, one day in the guise of a ballad singer, the next in Handel's Hallelujah wig, another time as a Jewish csardas player, and then again as genuine symphonists dressed up as number ten". The general public, on the other hand, has always taken kindly to the csardas, which, with the similar verbunkos (recruiting dance) were the principal dance melodies that Brahms borrowed.