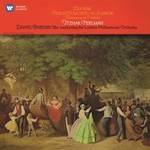 With its rhapsodic first movement, intensely melodic Adagio and spirited, dancing finale, Dvorˇák's violin concerto shares an aesthetic with the Brahms concerto and Bruch's first concerto, but there is no mistaking its characteristic Czech flavour.

During the past several years Mr. Perlman has also appeared on the conductor's podium, and through this medium he is further delighting his audiences. He has performed as conductor with the Chicago Symphony, Philadelphia Orchestra, Boston Symphony, National Symphony, Los Angeles Philharmonic, St. Paul Chamber Orchestra, and the symphony orchestras of San Francisco, Dallas, Detroit, Houston, Pittsburgh, Seattle and Toronto, as well as at the Ravinia and OK Mozart festivals. In January 2000 he was named Principal Guest Conductor of the Detroit Symphony. In July 2002 Mr. Perlman was appointed Music Advisor of the St. Louis Symphony through the 2003/2004 season. In addition to performances this season in Detroit and St. Louis, Mr. Perlman will conduct the Chicago, Pittsburgh, Montreal, Toronto, and National symphonies.

Internationally, Mr. Perlman has expanded his career as soloist to include conducting engagements with the Berlin Philharmonic, Concertgebouw Orchestra, London Philharmonic, the English Chamber Orchestra, and the Israel Philharmonic. As soloist, Mr. Perlman continues to delight audiences in major centers throughout the world. During the 2001-02 season, he appeared as soloist/conductor with the Utah Symphony at the Winter Olympic Games in Salt Lake City. He also participated in the gala opening of Philadelphia's Verizon Hall, with Emanuel Ax and Yo-Yo Ma performing Beethoven's Triple Concerto. He closed out the season with a tour of Asia that brought him to ecstatic audiences in Shanghai, Beijing, Guangzhou, Hong Kong, and Taipei.

Mr. Perlman has a long association with the Israel Philharmonic, and he has participated in many groundbreaking tours with this orchestra from his homeland. In November of 1987 he joined the IPO for history-making concerts in Warsaw and Budapest, representing the first performances by this orchestra and soloist in Eastern bloc countries. He again made history as he joined the orchestra for its first visit to the Soviet Union in April/May of 1990, and was cheered by audiences in Moscow and Leningrad who thronged to hear his recital and orchestral performances. In December of 1994 he joined the Israel Philharmonic for their first visits to China and India.

In June 1990 Mr. Perlman signed a new five-year contract with EMI Classics, for a minimum of ten recording projects. November 1992 saw the release of the Brahms Violin Concerto with the Berlin Philharmonic conducted by Daniel Barenboim: a performance which was subsequently released on Laserdisc and VHS, together with the Beethoven Violin Concerto. A rare coupling of the Ben-Haim and Castelnuovo-Tedesco concertos, recorded with the Israel Philharmonic and Zubin Mehta, was released in Spring 1993, as was The Art of Itzhak Perlman, a four-CD edition celebrating the range of his EMI Classics recordings, chosen by Mr. Perlman himself, to mark his 21 years with the label. In 1994 a 2CD set of Brahms Piano Trios was released on EMI Classics, for which Mr. Perlman was joined by Vladimir Ashkenazy and Lynn Harrell, and Perlman's recital album with Samuel Sanders, entitled Bits and Pieces was released in August 1994.

Itzhak Perlman's recordings regularly appear on the best-seller charts and have garnered fifteen Grammy Awards. His latest Grammy was awarded for The American Album, with Seiji Ozawa and the Boston Symphony Orchestra. Other recent releases include a Grammy-nominated live recording with pianist Martha Argerich performing Beethoven and Franck Sonatas, and A la Carte, a recording of short violin pieces with orchestra. Throughout 1995, EMI honored Mr. Perlman on the occasion of his 50th birthday as "Artist of the Year" with the release of a 21-disc set entitled The Itzhak Perlman Collection. The release of this set coincided with The Definitive Perlman Experience festival in London in which Mr. Perlman performed seven concertos in four concerts at the Royal Festival Hall. In November 1995 EMI Classics issued (on CD and video) a live recording of Beethoven's Triple Concerto, recorded at a concert Perlman gave with Daniel Barenboim, Yo-Yo Ma, and the Berlin Philharmonic in January 1995.

A major presence in the performing arts on television, Itzhak Perlman has been honored with four Emmy Awards, most recently for the PBS documentary Fiddling for the Future, a film about the Perlman Music Program and his work as a teacher and conductor there. His third Emmy Award recognized his dedication to Klezmer music, as profiled in the 1995 PBS television special In the Fiddler's House, which was filmed in Poland and features him performing with four of the world's finest Klezmer bands. Subsequent to this program's release on home audio and video (EMI), there have been several highly successful North American tours of In the Fiddler's House and a second CD, Live in the Fiddler's House (EMI) recorded at Radio City Music Hall. In 1992, Mr. Perlman received an Emmy for the PBS documentary of his historic trip to the Soviet Union with the Israel Philharmonic entitled Perlman in Russia(Angel/EMI Video), which was chosen as best music documentary; the trip coincided with the 150th anniversary of Tchaikovsky's birth.

Mr. Perlman has entertained and enlightened millions of TV viewers of all ages on popular shows as diverse as The Late Show with David Letterman, Sesame Street, the PBS series The Frugal Gourmet, the Tonight show, the Grammy awards telecasts, and numerous Live From Lincoln Center broadcasts and PBS specials, including A Musical Toast and Mozart by the Masters, both of which he served as host and featured performer. In July 1994, Mr. Perlman hosted the U.S. broadcast of the Three Tenors, Encore! live from Dodger Stadium in Los Angeles. In March 2001, a worldwide audience in the hundreds of millions saw Mr. Perlman perform live on the 73rd Academy Awards telecast, as he and cellist Yo-Yo Ma performed excerpts from the five film scores nominated in the category of Best Original Score. One of Mr. Perlman's proudest achievements is his collaboration with film score composer John Williams in Steven Spielberg's Academy Award winning film Schindler's List in which he performed the violin solos.