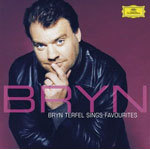 "We have music theatre, we have opera, we have hymns, we have folk songs. This disc encompasses all of that." - Bryn Terfel

Bryn Terfel is a born entertainer. Who else could appear on "Songs of Praise", sing at the Millennium Stadium before a rugby match, and, with the huge prosthetic belly of Falstaff, shrink the stage of the Royal Opera House or the New York Met to fit himself. And he works with artists from every corner of the musical world - here with two of the world's biggest-selling artists: Norwegian siren Sissel, whose otherworldly voice wafted over so much of the Titanic movie, and Andrea Bocelli, the Italian heartthrob.

It's been a dozen years since Bryn graduated from London's Guildhall School of Music and Drama and won the lieder prize representing Wales in Cardiff at the Singer of the World competition. Nothing ruffled him - he took it in his stride and went on to début at Covent Garden in Don Giovanni, take the rest of the Mozart repertoire by storm and make Verdi's Falstaff his own from Sydney to Chicago, while retaining his love of classic songs in every style.

Breaking down the barriers is crucial to Bryn. That's what he's always been about. His father farms sheep and cows, and his mother worked in a special school for handicapped children. "So music for me came from music therapy and I saw it was a communication art form." He grew up near Caernarvon in a Welsh-speaking home, reciting poetry at three, singing at four, dreaming he would be George Best. He'd never been to an opera house, never seen an opera, although he'd performed constantly in competitions in Wales, didn't know anything about Pavarotti or Beethoven.

His best friend Aneurin Parry first met Bryn when he was eleven at Diffryn Natlle Secondary School. They played for their school basketball team because they were both tall. They also liked to play snooker and liked to play truant. Says Aneurin: "Diffryn Natlle was the kind of school where it wasn't cool for boys to sing. Bryn changed that. He introduced me and quite a few other boys to singing. We established a male-voice choir. He was very prominent because he'd appeared at National Eisteddfods. Seeing his success the guys were encouraged. When I did a duet with him we actually won."

The fact that Bryn got them to sing was the important result. The fact that he made it cool was something he did instinctively and has carried on doing. It's not just his voice that's solid, it's his credibility. Aneurin Parry: "He was never shy. The stage presence he has now he obviously had from an early age. He was always confident. I remember seeing him before I knew him, when he was seven or eight, at Noson Llawen, a barn dance with singing and story-telling. He was singing a duet with his brother to the accompaniment of a harp." (On the new CD harpist Katherine Finch provides the heavenly strings.)

Aneurin and Bryn still speak Welsh together to this day. "It doesn't matter whether we're at home, Majorca or Salzburg", says Aneurin. "We were brought up in an area where the cultural and linguistic character is unique, and in that sense we were privileged. It was an idyllic place." Bryn remains determined to maintain that privilege and put energy back into his Snowdonia home. That's why every year he hosts the Faenol Festival, where he attempts to bring a mixture of opera, Welsh rock, and traditional music back into his own community.

What Bryn loves is music's ability to uplift, move, touch, communicate. He enjoys breaking the rules. In fact he says that there are no rules that have been handed down by Mozart, or Rodgers and Hammerstein, or Lerner and Loewe, that say Bryn can't sing this or that. He makes everything his own, with a voice that is more distinctive than perhaps any other of his contemporaries. His bass-baritone is full of many colours so that people think they know him.

With this CD more than ever before it's his whole life in music that's come together. It's what beats inside of him. "We have music theatre, we have opera, we have hymns, we have folk songs. This disc encompasses all of that."
- Spencer Bright

Simple Gifts (Incls 'I'll walk beside you' & 'How great thou art')