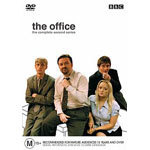 "You will never work in a place like this again. This is brilliant. Fact. And you'll never have another boss like me, who is basically a chilled-out entertainer."
-DAVID BRENT

This release features all six episodes from the Second Series of Ricky Gervais' BAFTA-winning sitcom The Office.

Neil, the new guy in charge, is Brent's worst nightmare: younger, better-looking, multi-skilled - and here's the killer - more popular. Meanwhile unlucky-in-love Tim finds his fortunes changing, we discover there's more to demure Dawn than first meets the eye... and even less to Gareth. All this plus that dance...

The Young Ones - Series 1

American IV - The Man Comes Around

Get Rich Or Die Tryin'