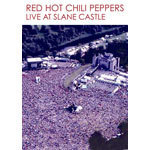 On 23rd August 2003, the inimitable Red Hot Chili Peppers played to a sell-out crowd of over 80,000 ecstatic fans at Dublin's illustrious Slane Castle.

Performing to a sea of waving hands and banners stretching back away from the stage, L.A.'s funk-rock superstars were on blistering form. Fans screamed with delight as the pumping hit singles Give It Away and the incendiary Suck My Kiss from 1991's Blood Sugar Sex Magik album rocked Slane's famous castle.

The multi-platinum hit Scar Tissue from 1999's adrenalized funk album, Californication, swept easily through the vast crowd and a simple but potent rendition of By The Way, led the Californian boys to proclaim the show their finest hour.

As the sun went down on Ireland's biggest music event, the ecstatic fans were treated to an encore with the bittersweet anthem Under The Bridge, the mellow tones of Californication and to finish, Power Of Equality. "I would definitely say that this was one of the most amazing experiences we have had as a band, without any doubt," enthused an elated Anthony Kiedis, lead singer with the Chilis.

Few rock groups of the '80s broke down as many musical barriers and were as original as the Red Hot Chili Peppers. Creating an intoxicating new musical style by combining funk and punk rock together the Chilis spawned a slew of imitators in their wake, but have still managed to be the leaders of the pack at this stage of the 21st Century.

'Live at Slane Castle' also contains an exclusive screensaver which fans can save to their desktops, when watching the DVD on their PC.

This high-definition production transforms a milestone event into a unique experience and takes music DVD to a new level. In addition to a broad range of moods and looks developed in the show, key moments of the band's kinetic performance are captured in what has come to be known as 'time-slice' - a technique heavily exploited in music promo clips and films like 'The Matrix', but never successfully achieved before in a live event situation.

Also featured on the DVD are six animated sequences which are back-projected on the screens during the show. These can be selected individually as visual alternatives to the live performances of those tracks, or as a silent TV screensaver on a continuous loop - another innovative feature of this DVD presentation.

'Live At Slane Castle', a film that truly captures the spirit, attitude, energy and music of the Red Hot Chili Peppers.

Get Your Buzz On - Live