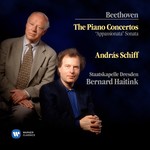 "Beethoven is an entire life in music, and each of the piano concertos is different," Bernard Haitink has said. "Every person lives his life and changes. With a genius like Beethoven, such a perspective is magnified several times." Written over some two decades, Beethoven's five piano concertos exemplify the constantly astonishing scope of his creativity. In András Schiff's words, "Beethoven's music is cosmic and metaphysical. Each of the concertos has a unique character … Every note has to be played with responsibility and spiritual gravity." Schiff and Haitink here perform with the Staatskapelle Dresden, an orchestra whose great tradition extends over more than four centuries.

"this is a performance of great integrity with an especially fine first movement." (Piano Concerto No 3)