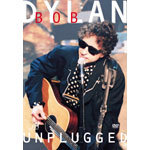 Bob Dylan, by virtue of the fact that he is one of American's rock legends, needs no description or identification for most music listeners. The gravel-voiced wonder is at his best on this historic 1995 Unplugged performance.

The intimate, informal setting highlights the emotion in Dylan's music and brilliant lyrics. Renditions of classic songs including "All Along The Watchtower," "Like A Rolling Stone," and "Desolation Row" remind audiences of how a young man called Robert Zimmerman became one of the greatest rock musicians of the twentieth century. In addition to the performance broadcast on MTV, this video version features the previously unreleased song "John Brown." as well as four other bonus tracks.