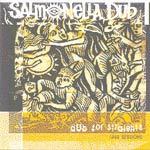 The skanking roots reggae band applied reggae rhythms and bowel-stirring bass tones to a handful of bad taste covers (from Fred Dagg to Nancy and Lee) and original material, in the Westport Racetrack tearooms in January '93.

Arguably NZ's best known dance act, Salmonella Dub blend a hybrid of skanking roots reggae and low rolling dub basslines with drum n' bass breaks, in a distinctly Pacific style. They've paved the way for many local dance/electronic groups, raising the bar for and profile of dance music from our corner of the world.

Beginning in the summer of '92/'93 when Andrew (guitar), Dave (drums and vocals) and Mark (bass) applied reggae rhythms and bowel-stirring bass tones to a handful of bad taste covers, their first show was a mixture of these covers (from Fred Dagg to Nancy and Lee) and original material, in the Westport Racetrack tearooms in January '93.

The music found on 'Dub For Straights: 1993 Sessions' was recorded in this period and is made up of all original songs, including a live version of 'Regi Flute' from one of their early Dux de Lux shows, featuring Craig Allen on percussion.

In '93 they couldn't afford a sampler, so they hot-wired an old guitar on/off pedal directly into the motor of a cassette player so they could trigger the cassette deck with their feet. Mark found a bunch of old Mutant Ninja Turtle tapes in a dumpster at the back of Echo Records and the band spent many nights recording over these repeating the same sample over and over again in real time!

Salmonella Dub have more than a handful of full-length albums, EPs and singles in the marketplace, but 'Dub For Straights: 1993 Sessions' is the first time most fans will be able to hear their early incarnation and where the Salmonella Dub seed was sown.