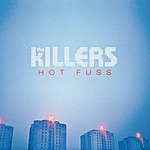 The Killers quartet hail from Las Vegas, Nevada - 'Hot Fuss' is their highly praised debut album, featuring the smash singles "Somebody Told Me", "Mr. Brightside" and "Smile Like You Mean It".

Formed in 2002, The Killers are a 4-piece rock group from Las Vegas, Nevada, comprised of singer + keyboardist Brandon Flowers, guitarist David Keuning, bassist Mark Stoermer and drummer Ronnie Vannucci. A series of gigs in U.K. secured them a worldwide recording deal with Island Records the following year and they finally released their debut album, 'Hot Fuss', in June of 2004.

The CD reached #13 on the Billboard Top 200, #8 on the Canadian Albums chart and in early 2005 hit #1 on the British chart. 'Hot Fuss' went multi-platinum, selling 5 million units worldwide on the back of the smash singles "Somebody Told Me", "Mr. Brightside" and "Smile Like You Mean It".

'Hot Fuss' features eleven nuggets of reel-you-in storytelling genius and musical nectar that belie the incredible truth that chief songwriter and lyricist Brandon Flowers was only 22 years old at the time.

The songs span from the "very Vegas - like Ziggy came to town" first proper single release "Somebody Told Me", stalker's tale "Andy You're A Star", through to "All These Things That I've Done", which features gospel choir, Sweet Inspirations, who are best known for their work with Elvis Presley, Jimi Hendrix, and Aretha Franklin. "Mr Brightside" is a tale of jealousy, while "Midnight Show" and "Jenny Was a Friend of Mine" are the darkest moments on the album, being two-thirds of a murder trilogy. (The first part, "Leave the Bourbon on the Shelf" turned up a few years later on the 'Sawdust' B-sides and rarities collection).

'Hot Fuss' is a triumph, especially for such a young band - ensuring that the future for The Killers is a blast!