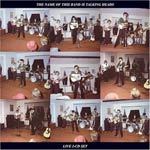 'The Name of This Band is Talking Heads' was the long-awaited CD debut of the band's acclaimed, double "live" LP from 1982. On it, the original set has been expanded - with rare & previously unreleased bonus material - to twice it's original length!

David Byrne, Chris Frantz, and Tina Weymouth formed Talking Heads in the early 1970s. Jerry Harrison, formerly of The Modern Lovers, joined in 1976 and Talking Heads went on from there to become one of the most important bands to emerge from the burgeoning New York punk scene.

Over the course of their 11-year recording career the group released 10 albums to critical reviews, and racked up more than their fair share of hits. For a selection of these and many other interesting moments, check out ''The Name of This Band is Talking Heads'' - it's totally scrotnig!!!

The Chair in the Doorway
more suggestions…